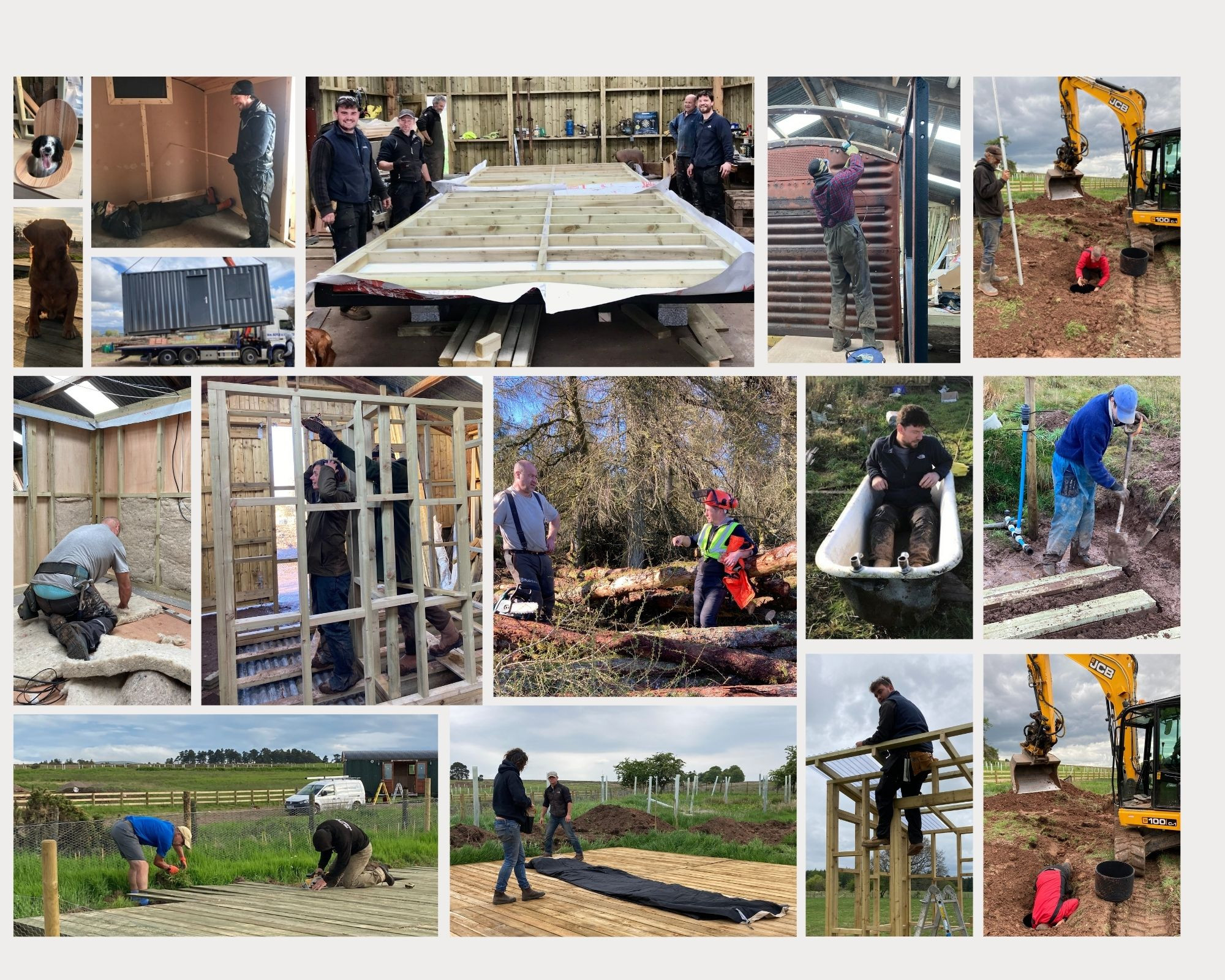 From day dreaming to welcoming our first guests, pulling the team together and building through the pandemic... the process has been a roller coaster!

We always had plans to build a little hideaway on Tullibardine Hill. The old falling down picnic hut was the perfect spot and we spent many nights sketching plans on the back of beer mats.. but when lockdown hit we started to think bigger when we realised we weren’t the only ones who were dreaming of somewhere to escape to! However we had our work cut out!

The broken-down sheep shed, two derelict cottages and an outbuilding that used to house the shepherd’s pack of collies was all that was left of the old farm. A lot of graft was needed but with the views, the ruggedness and the feeling of remoteness, we knew we had a shot of building something really special.

We took the leap and submitted planning in November 2020, crossed our fingers and waited. We were over the moon to have the application approved in March 2021 but somewhat daunted about the task in hand...

It took 2 days for us to rip everything out back to bare metal... just 9 weeks before our first guests arrived...

...but we rolled up our sleeves and got on with it. The core team came together with Susan (Site manager) Jerry and Kenny on infrastructure, our carpenter Steven, Liam on timber framing and Angus (that’s me) trying to hold it all together.

The railway carriage was a facebook marketplace find. It was rescued from being used as an animal shelter and put back on wheels by the previous owner but it was still just a shell. It arrived at Muiredge on a misty winter’s morning and after convincing the local joiner, Steven Roy, to take on the job work commenced in March. It took 2 days for us to rip everything out back to bare metal (just 9 weeks before our first guests arrived!) and the complete rebuild began.

The shepherd’s hut project was an easier build by comparison. The chassis was welded together by Tullibardine Smithy with the timber floor and walls built off the metal box section. The complete build of the shepherd’s hut took Steven only 6 weeks, including the incredible bespoke kitchen and beds.

The spring of 2020 never actually made an appearance, with us still having frosty nights late into the year. The weather finally warmed up in mid-May and we pushed on with the work. Susan drafted in her sister, Gill and planted 1500 new native hedge plants to define the site boundary, and all fenced to keep the rabbits away. However, we soon had evidence of vole damage and I still remember the look on Susan’s face when she realised we would need to go back and install vole guards on each plant!

Next was the new water supply with a new 600m long water main buried around the site, and the installation of a new pump and pumphouse to direct our spring water to each tent and hut.

Liam was busy framing up each of the compost toilet and shower pods and at one stage had blocked the entire farmyard with stick framed walls! The toilets were brought back up to the site at the end of May, to be clad with larch boards we had harvested and milled from felled trees in the woodland adjacent to the site back in March.

Now we were into June and nearly complete with only the huts to wire, plumb and relocate to their new homes, the tents decks to build, tents to erect and furnish and all toilet plumbing... as well as the shed to gut and refit...!

We got there in the end with a huge effort from the core team as well as some great favours called in from family and friends near and far. We will be forever in debt to those that helped in the final days – you all know who you are!

We are all so proud of what we have created and are delighted to be welcoming guests who we hope will love the place as much as we do. And for any guests who would like to chat over the build I’d be happy to bore you over a beer next to the campfire.

We’re not resting though as the team are itching to get on to the next project so sign up to keep up with the evolution of this beautiful corner of Perthshire.

Stay in the loop